WELL,  the thing about Smallville is that esthetically, all of the costumes on the set of that show are derived from everyday clothing that people either don’t normally wear or are tailored with DC characters in mind with a twist in the concept on clothing you can probably find anywhere.  They always teased you with the idea of capes and long boots. And i kinda liked that. It made the producers and the costume designers think inside the box and off to the left.  I wanted to go the same route with Bats. I wanted him to wear gimmicky clothing based on tech and materials already existing yet repurposed and reconfigured to match his sensibililties. Essentially, a well-talented CosPlayer who is great at making really great costumes would be able to pull it off easily and it would still look great.

When Kwanza Johnson asked me to be on the Smallville project, there was no way i was  going to say NO.  Who would pass up the chance to create Batman for Smallville?  The thing that everyone was begging for when the series was live?

Hell YEAH, i was gonna do it. Even though i had something that i was privately working on and was going to take a month off to do it, you don’t pass up paying work. EVER.
And defiinitely not something that’s going to make a mark like RECREATING one of the most prevalent heroes ever made.  One that even made weaponsmakers rethink portable, personal and mobile combat just off of the ideas the creators in the past had the Bats use to get out of hairy situations.

I came up with my first spin for Batman. I wasn’t going for cape, per say, just something that would turn into one if he needed to glide to the next building or out of a high flying plane in chaos.

You never know with Bats.

So i thought, if he went to a fetish shop and got some leather or rubber latex masks,  and some black facepaint, he could scare the living stew out of someone he was persuing.  The costume just naturally followed.

Methinks it was too much for their minds.   They thought it would bring the wrong message… and it was too dark for the Dark Knight.

HE’s the DARK KNIGHT, people.  I was going for urban warrior in a preparation for superurban combat.  So if he’s a Billionaire, he’d want nondiscript materials that he can alter to his liking with no crazy overhead and remaking material that will do what he wants is the ultimate in ego.

Even up to slapping the inside of his elbows against his symbol unlocking the jacket that would cling to his inside arms so that it would balloon out as wings when he wanted to beat feet from tall distances.  Or smack the material and it would become superhard armor that would block projectiles and some energy bolts.  I know. I think too much.

IN the end, they didn’t use it, but you get to SEE IT.

I can’t wait for someone to CosPlay this uni.  I would FREAK in joy if they did. 😀 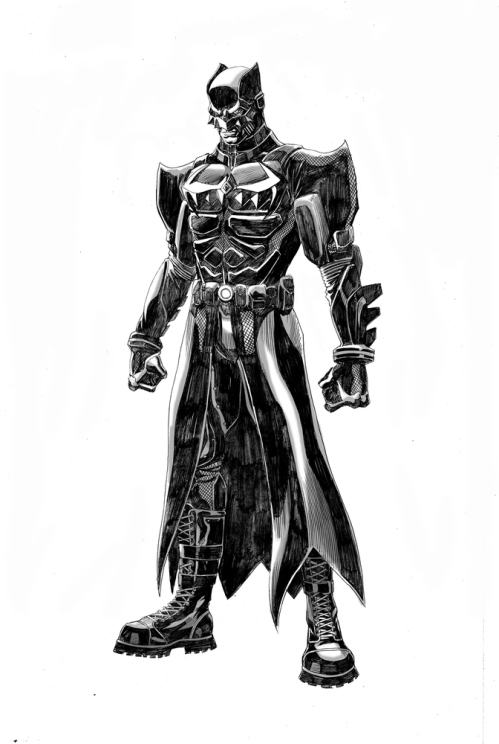