SO, i’m doing a miniseries for IDW called SPIKE.
You know who Spike is…. and if you don’t, you spent a great deal of the
’90’s in your closet. SPIKE of Buffy the Vampire Slayer fame.
I never thought i would be working on this character, nor
did i think that i would be working with IDW.
SO it goes to show that you should always keep your eyes open down the road because
you never know which street you may frequent. 😀

So i figure that it would be great to post some sketch headshots that Myself and Marc Deering did… just to see how we would gel… and it’s pretty cool. 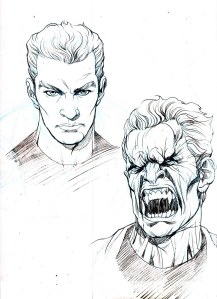 I have to check to see when it’s coming out. I’m usually in my “cave” so i don’t check on those things. Usually busy just making deadlines. But as soon as i know i’ll post.

By the by, if the letters are in Lavender, click on it. 😀