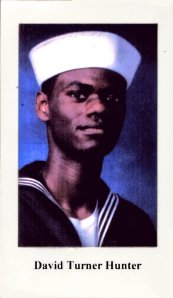 This is going to be a tough one.

I can never look at this man’s face without some regret.
Without some sadness.
Without feeling something’s amiss.

I mean, we all have to die someday, right?

I’m a Born Again Christian and, even still, that doesn’t set right with me.

Not that I blame God or anything. That would be counterproductive.
And frankly, just dumb.

God has done way too much for me to think like that.

I met David Hunter in 9th Grade.
Always well-groomed, always neat, always put together.
One of those brothers that you always enjoyed being around.

One of those regrettable things you say to yourself, “It’s a shame that we didn’t hang around more after college.”

He had this crazy knack for showing up just when i didn’t expect him but always when i needed to see someone that made sense.
This man was NEVER in trouble with anything. This man always had your back. And if he was scared, he never showed it on his face.

He was potentially a great comic artist. He love drawing, and he loved superheroes. More than anything else, he LOVED KERRY GAMMILL.
I mean LOVED. KERRY GAMMILL.

Everything he drew was inspired by K.G.
We used to talk about his run on Avengers and Power Man and Iron Fist back in the days.
And David would go on for hours.
How it would be his one dream to meet Kerry.

When i made it into professional pencilling…. the big leagues…
He would come to signings and tell me how proud he was of me.
But more with his eyes than with his mouth.
He believed i should have hit up Marvel and DC two years before i did it.

But every time i saw him, it was more important to me just to know how he was doing.
I had his phone number, but life would get in the way.
I would bump into him on the streets of Manhattan, seeing him with basketball in arm, drinking a diet coke…
something that he really enjoyed since he acquired diabetes in the Navy.

We would walk into Jim Hanley’s Universe, yuck it up a bit,…
then he would go his way and i would go mine. And i always said that i would call him and make it a habit of it.

I would let life get in the way.

I saw him on my 30th birthday. After i made the decision that i wasn’t chasing women anymore. Wasn’t gonna be anything except my relaxed and confident self when i did meet them. That if i didn’t get the number, it ain’t no thing.
This after i gave a girl i was chatting up back her number because she was playing head games.

As i walked away from her, there he was… walking across my path. We spent the rest of my birthday together just chillin’ and taking pictures.
He even bought me a Big Mac. Can you beat that with a bat?

I hadn’t seen him in a year or so after the last time i met up with him and i was busting my butt trying to make a Captain Marvel deadline and about nine-ish my phone starts ringing.

And my little voice told me it wasn’t good. Dave’s sister was on the phone. I hadn’t talked to her since she was preteen. And she’s calling me 10 years after i saw her last. and the first thing she said was hello. And the next thing i said was..”He’s dead, isn’t he?”

And she said yes.

Turns out that he acquired hypertension brought on by the diabetes and he had been puking for the better part of a week and refused to go to the hospital.

Talked to his sister, girlfriend and his mother.. said he was going to drink some apple juice and then wake up in the morning and get himself checked out.

And never woke up.

I just pray he made peace with God.

The first of two Davids that died that year.

The other in February. All from High School.

I went to the wake.

I brought flowers and met up with his sister. She’d grown up so beautifully and she just had that “mommy” look. I hugged her as i went down the aisle and i saw my boy, David, …

I laid down the flowers next to him.

You could tell that spark that gives life was nowhere near him now.

“You never bring me flowers” i said to him.

and just stared after laying them down on his left side.

And i remembered all of the stuff we did as homeys and made some great
funny moments by telling his sister and family all the funny stuff he did.

Because i didn’t think there should be any crying at his funeral.

He was just too cool for that.

Even in the casket.

I talked about his art and his sister kept saying, “Kerry Gammill”.

and i laughed and said, “Kerry Gammill.”

I hugged her and left early and made an internal promise that i would tell Kerry that David said, “Hello.”

I’m sitting at NYComiCon April 19th, and my road-dog Smoke, the professional wrestler,
brings Dwayne McDuffie (writer of the Justice League and BEN 10 cartoons) and Kevin Grevioux (writer/actor and creator of the Underworld movies and writer of the New Warriors for Marvel). We talked and carried on. I was really glad to meet “Uncle Dwayne” and Kev.
I walked to eventually bump into Eddie Berganza, DC editor…
I run smack into Joe Quesada’s wife….
Talked shop with Dan Buckley, Marvel Enterprise President…
Bumped into Drew Johnson, artist of Supergirl…
Run right into Andy Helfer, senior partner of Serious Comics
whose shaking hands with …..

I introduced myself to him and told him how much i truly appreciated his work in the past and told him of my now 5 years deceased friend whose whole world artistically consisted of him.

He smiled and shook my hands and gave his condolences.

and i told him that David said “Hello.”

So i kept my promise, David.

I told him “Hello” for you.

I still miss you though.

See you in the afterlife, dog.

As tough as i thought.